As a fan of underground electronic music, the music producer, Twitch streamer, and label owner Chris Reed, who goes by the stage name Plastician, was used to going the extra mile to catch a show. “I literally used to have to climb through tower block building windows and hide from the police.” Today, he’s a DJ and runs a music label called Terrorhythm. He goes on, “This is like nothing compared to the shit we’ve had to put up with before. A lot of us have been through shit like this in the past.” For Dave Eckblad and many other DJs, Twitch became a way to maintain their local music scene during the coronavirus pandemic. Before the pandemic, he worked in music promotion and co-owned a record store. Now, he produces the Twitch stream for the Minneapolis-based music collective Intellephunk.

The Threat of the DMCA

What is the DMCA?  From Wikipedia:

DJs already know the threat of copyright abuse. Twitch’s DMCA takedowns represent another setback in a long history of push and pull between creators and copyright enforcement. What is new, however, is how these stories illustrate the larger issue of uneven and confusing copyright enforcement on the internet. As Twitch doubles down, DJs cast doubt on the platform’s future with music.

Sarvesh Ramprakash, also known as Icarus Redux, started in Los Angeles’ electronic music scene in 2014. Today he spins at shows across the midwest and organizes music communities for artists of color. He told me he hasn’t performed recently on Twitch, specifically because of the DMCA issue. “Intellectual property has always been a dicey subject in dance music production and performance, but with streaming in general—not just livestreaming—we’re in a new era of being slapped hard by intellectual property laws.”

Even as some performers continue livestreaming on Twitch, Ramprakash still avoids the website today. “DMCA takedowns are perhaps something that one can take in stride, because audio isn’t muted while the stream is going. But it’s not a good long-term solution if you’re trying to build up some kind of brand via a specific channel,” he says. It’s also risky. Twitch uses a three-strike policy for its users. If a creator gets more than three strikes, Twitch could ban them entirely.

The Uneven Impact of Copyright Enforcement

Identifying copyrighted music on services like Twitch is entirely automatic, with very little human intervention, even at the appeals stage. This means that platforms like Twitch will more likely catch popular, well-known music than obscure, underground sounds. This created a unique problem for streamers who wanted to play Harmonix’s rhythm game, Fuser. In the game, you play as a DJ and mix sets for a roaring virtual crowd.

“When I first decided I wanted to stream Fuser, the question of DMCA was absolutely the first thing on my mind” says composer and streamer Ryan Mitchum, who goes by the name Chongo online. He went and looked up the rules for streaming the game. Although he felt apprehensive about it, he ended up streaming it on a whim.

He says , “As someone who’s made mashups and other types of derivative content on Youtube for a pretty good chunk of time, I think that I’ve honestly just been desensitized to getting my work taken down by copyright blocks.” Even those that play original music aren’t exempt from issues. Plastician says, “A lot of the music I play personally is often unreleased. A lot of it is my own and music that’s been sent to me from the people who produced it. So in many cases, not a lot of the music I play gets picked up by DMCA, because it doesn’t exist in the system anywhere.”

However, when he first started out, he faced a unique problem. “At the beginning, a lot of the music that received DMCAs was music by my label. So I’m seeing DMCAs for stuff that I owned,” he says. He wanted himself and others to be able to use his music without fear of a DMCA strike. “I had to speak to my distributor and ask, ‘What is causing these strikes?’ Because my personal stance is, I don’t mind people streaming my music on their streams. I am quite happy for them to do it.”

His distributor said that one vendor was the cause of all the takedowns, a database called Audible Magic. Once he removed it from the database, the DMCA notices stopped. I asked Plastician if he had any luck working with Twitch to resolve previous strikes. He tells me, “I sent in a few requests to reverse some of them in the past. I didn’t notice any email to open up the dispute, so I can’t really comment on that, since I personally haven’t had any contact from Twitch. Not yet anyways.”

Some DJs have a different, new approach: Bypass Twitch altogether and they don’t have to worry about copyright abuse and DMCA takedowns. Besides, many DJs aren’t anchored to Twitch the same way that game streamers are, and they’re willing to build their own alternatives, assuming their audiences will come with them.

Eckblad says he is “definitely working towards a custom self-host solution.” His streams never used Twitch’s tipping system, so he’s not worried about losing monetization features unique to the platform. He says it was nice to use something already built, but “we’re not going to lose anything from going away.” Twitch Streamer Neekolul Alleges She Was Abused For Seven Years 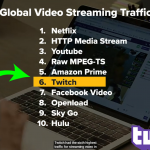