I thought it would only be fair to write about Wyggs XBL, the only true NA console player to qualify for the Winter Royale Finals. We are talking console here. An Xbox One, 60fps guy. Lets not get confused by the Ghost Aydans or NICKMERCS, PC, controller, 240fps combo players… this is straight console ladies and gents.

There has been many topics floating around on how Epic should split tournaments and have the platforms split for fair play. PC vs PC and Console vs Console. We are not there and probably will never get there. But to have a public 1 million dollar tournament is amazing, so let’s take what we are given.

Wyggs has a bright future in Fortnite

Fortnite has a huge console following, you tend to root for the underdog, knowing that a controller can only take you so far when competing against kb&m. Wyggs XBL defied all odds and qualified for the finals using his Xbox. I did post an article breaking down how the early sessions were clearly the best odds at qualifying. Wyggs did exactly that with 29 points in session 1. 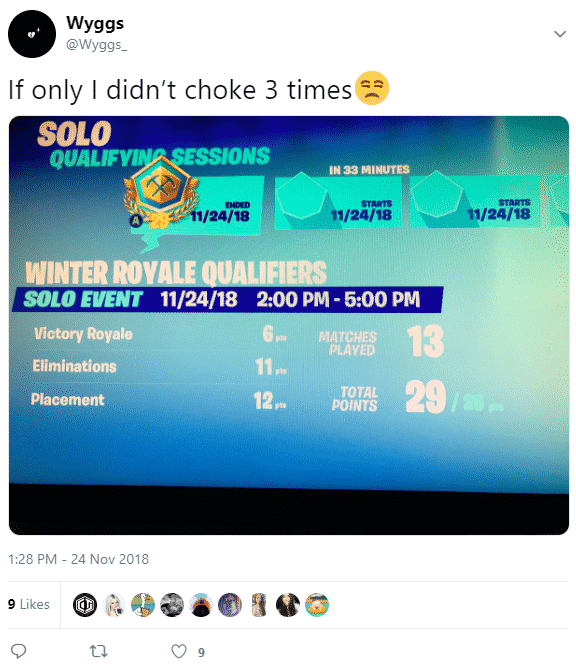 His 29points in session1 were enough to secure him a spot in the Finals.

Not too shabby for a controller to put up 29 points. The same totals as Ninja and Myth qualified with.

The debate will forever be ongoing on how PC players will always dominate. Truth be, it’s not even close and will never be. Sure early game slaying is probably at a controller advantage with aim assist. As players drop and zones tighten, certainly no controller in the world can come close to competing when building becomes crucial.

Knowing many controller/console players root and follow their own, I thought it would be a nice gesture to mention Wyggs and how he is the only one, out of millions to make it into the final 100.

Wyggs was seen and winning a duo Pop Up match that had Tfue and Cloakzy in the final 5. Although Wyggs did not kill Tfue, he did win the match as Tfue watched on. Tfue viewers immediately moved over to Wyggs’s twitch channel to check him out. Here is a clip showing Wyggs go from 45 viewers to 545 viewers, 60 seconds after winning his pop up match.

After watching Ghost Issa, controller player, finish fourth on the EU side, Wyggs  had a strong showing in the Winter Royale Finals. He finished 84th taking home $1,500 USD. Not bad for a first real test, he finished ahead of some big names like Symfuhny, TSM ZexRow and Ghost Sean.

It will be interesting to see how Wyggs does in future events, however because he is a console player, he will probably be limited to online tournaments only.

Needless to say don’t be surprised if you see or hear more of Wyggs in the near future. He has proved he can compete with the best Fortnite players in the world.

His Twitch account has just over 5,000 followers but is growing. His Twitch profile can be found here.

For those interested here is a montage of Wyggs directly from his YT channel: